Payment via Direct payment or Payoneer or visit.

Whisked to picturesque Valetta, a lonely nurse met her soul connection. It set the bar in a stirring plot of spiritual and physical survival as a determined warlord in Africa and a cunning wife in America trapped them. The healing sands of Iraq, their only hope.

Tanya’s life was turned upside down when her son, Steve was attacked by renegades and she had to dig deep facing her worst fear to save them both.
It is the year 2048, 30 years after a devastating quake had changed Gauteng’s geographic features. The effects of the acid water, that covered most of the area, was visible to everyone but the government. The silent death crawling closer leaving devastation in its path.
Nothing is excluded from the terror.
Tanya and Steve’s path of survival meet up with the rebels in their search for clean water, and she had to face much more than just acid water to stay alive.
A thrilling story of courage and survival.
Book links:
Paperback – Group 7 Printers
Kindle – Smashwords / Amazon
TBR List: Goodreads 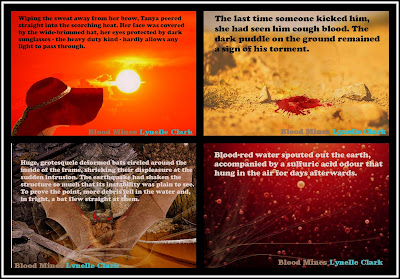 Blood Mines is full of pain, desperate hope and a need to survive. A blink of the reality of life currently in South Africa combined with fiction and romance. It is definitely not for sensitive readers for it is an eye opener for reversed racism and the possible outcome of it. Where current generations have to suffer for their forefather’s mistakes even if they want to live in harmony and peace. I have to say Blood Mines had me in tears and in a desperate feeling to reach out. The author had the ability to mirror the emotions and the physical pain up to a tee.
A must read, but be prepared to be confronted with harsh reality and the imagination of the author’s prospects for the future.                                                   Corri Badenhorst 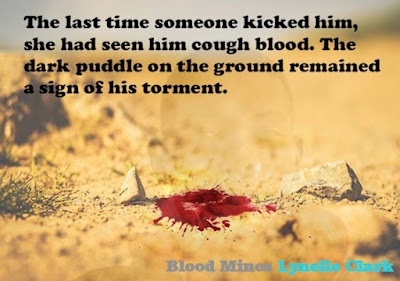 Anabella Anthony found she was alone in the world at eighteen. Early on, she made a choice; to live an ordinary life away from the lifestyle her parents preferred. However, they had plans for her; they wanted her to become a part of their choices.

All she wanted was a regular household, with normal day to day issues like her peers, parents she could respect, and who above anything else would accept her for the person she is. Torn between dreams that filled her mind with alluring effects and uncomfortable events which tried to sway her, she had to come to a resolution: find peace and stay true to her convictions.

Through it all, she excelled in her sport; a dedicated student who falls in love with a much older man. Will she give in to her body’s desires, or will she remain steadfast in her own choices? Can she find the courage to stand amidst the turmoil wanting to drag her down? And most importantly, will she ever forgive those who meant to harm her?

Aldrich Hagin, a lawyer, is ready to settle down. After a tragic loss he experienced right after university he is now, more than ever, ready to move on and start a family. And then he meets a young, energetic, lively woman who turns his life and heart around. Will he be willing to sacrifice his own desires and wait?  Can he help her and be the anchor she so desperately needs? Confronted with his own decisions, the choice is his as to whether he’ll stay or leave. What will he decide?

A love story filled with decisions both have to make; to stand against all odds and remain true to oneself.

Lynelle Clark lives in Gauteng, South Africa. Her writing career began in 2010. Lynelle has always loved to read books, in which she discovers new worlds. Meeting new people and travelling is one of her passions. So far, the writing journey has been exciting, but it helps that she loves the whole process from beginning to end.

What one reviewer said:

“This is an emotional tale, a love story, about forgiveness which compelled me to keep reading. I was hoping things would work out in the end. There were so many turns that I didn’t see coming. Nothing was obvious and the suspense was compelling me to read at a fast pace. Highly recommend.”

Release / Why I wrote BC / In Paperback  / Wine Tour

To add your book to Kreativ Boekrak is easy. Fill in the contact form for information. Dismiss